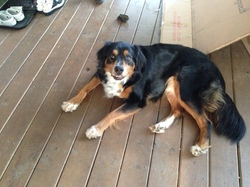 Sampson is a two and a half year old boy, who was adopted from a rescue group that listed him as a Berner/Aussie mix. The first owner moved away to deal with family issues, and good friends have cared for him in Durham. When I visited him the first time, I expected to see an energetic dog with mixed markings, but he proceeded to come over and do a 'Berner sit' on my feet. The lady apologized and said he does that a lot, but I explained what it was and we chuckled. He kept doing Bernerly things and yet was the calmest, best behaved rescue I’ve seen in a long time.

A couple in Durham, with two previous Berners, had contacted me and were looking for a buddy for the retired husband. They met Sampson, now Sam, and he went home with them the same evening. Welcome Bob & Karin and Sam, to the Blue Ridge Club. 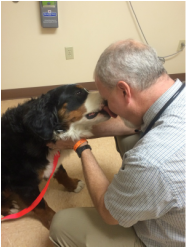 Tripp, the recent rescue, adopted by the a family in Roanoke, finished his Beginning Obedience class and the instructors said he was the star of the class. From not knowing any commands, not even ‘sit’, to being proficient in all commands, he's made amazing strides. Says a lot about the bond he has quickly formed with his new family and how much they love him.
The family recently added a four year old rescue Newfie, who was kenneled her entire four years, and Tripp is showing her how good life can be.

Tripp had been in two homes and was renamed in honor of their vet, who has cared for their previous Berners.  They immediately became friends.
​ 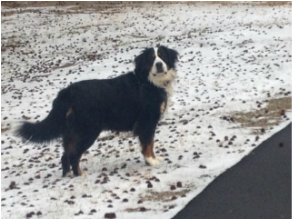 Sophie – 2 year old has been in two homes, adopted by a family in Charlotte! 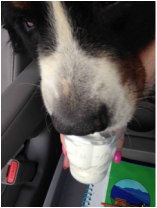 Bernie was rescued from a shelter in Jacksonville on a hot day in May, so he deserved some ice cream to celebrate. 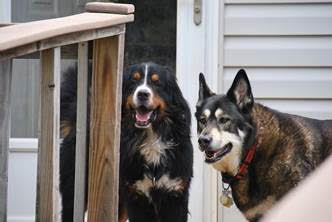 Brewsky is now 93 lbs and steady,  a far cry from the 62 lbs when picked up.  Where once there was skin and bones there is now a nice layer of muscle.  He is one very happy boy,  he leaps in the air like Tigger from Winnie the Pooh.  Brewsky has found his place in the house, in the bed, and the car.   Kona has finally accepted that he is yet another little brother she is going to have to look after and keep in line.  Next month Dr Jerry will run more labs on his kidney functions and hopefully they will be the same and not any worse from the last tests.

Sullivan - On July 3, 2014, we picked up our new rescue boy, Sullivan.  He was 2 ½ years old at the time and just as sweet as can be.  He spent his early years between FL and NC.  He would come to NC for the summers.  Unfortunately, his owners were getting divorced and 3 dogs were just too much.  We really lucked out.  He's a wonderful dog and has fit into our home without any troubles.  He gets along so well with our other rescue, Finnegan, other dogs and everyone he meets.  He's a bit hit everywhere he goes!  We are so happy to have Sully as a part of our family. 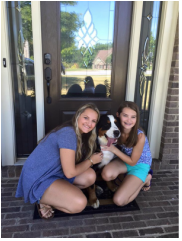 Klover and her new human sisters

Nana and Mack have been our most severe rescues, but both have regained their health and adopted by wonderful families. 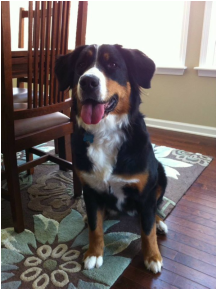 Nana recovered from her obstruction surgery for several months, under the watchful eye of Deb and her family. Nana was a puzzle with her digestive issues, but we all learned a lot form this special girl. Nana was adopted in early April by a family in Durham, who had a Berner previously, and adopted a shelter dog about the same age and energy as Nana. Nana sleeps in front of the door of their seven-year-old daughter’s bedroom. Nana is now at a healthy weight of 78 pounds. During her whole ordeal, she has been a true testament to the spirit of a Berner and her tail never stopped wagging.

Mack was adopted in February by a family in the NC mountains with a 4 ½ year old Berner and two children. It was wonderful to see Mack enjoying the snow and his new family! 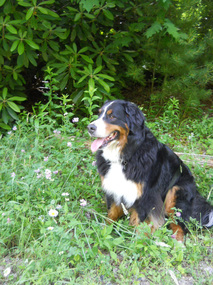 Cosmo, formerly Bentley,  is greatly enjoying summer in the shadow of Grandfather Mountain, thanks to Rescue Chair, Carolyn Paige.  He clearly thinks the Blue Ridge Mountains are a vast improvement over Florida summers.

Cosmo is a double rehome/rescue.  His first owner, who was in the military and named him Cosmo, asked for assistance in rehoming him when she was deployed.  Carolyn helped place him with a family in Jacksonville, who renamed him Bentley.  That family unfortunately fell upon hard times after he had lived with them 3+ years and could no longer afford to care for him, either financially or emotionally.

The situation was urgent by the time the family asked for help, so Carolyn called BRBMDC member Pat, a snowbird in the Orlando area.   Pat picked him up in Jax and took him home --- and fell in love.   Cosmo quickly became a Southward, with the full approval of Chuck, Pat’s yellow  Lab.

Cosmo’s age is uncertain, perhaps around eight years old.  His muzzle is graying and his eyes have the blue film of an older dog.   He is beautifully marked, featuring black dots between his toes.  Cosmo is extremely affectionate and very sweet, but needy and faint-hearted, and has many health issues including serious orthopedic problems. Chuck the Lab has undertaken to mentor and protect Cosmo in new situations.  Between Chuck’s guidance and Pat’s love, Cosmo is on the road to a happy retirement in his permanent home.  “‘Til death do us part.” 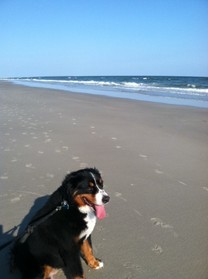 Bel was born in Stillwater, Oklahoma on May 15, 2009. She went to her first home in Chapel Hill as a young pup. The family had some personal problems and Bel did not fit in with their future plans. Mom and Dad got divorced, Mom got a new boyfriend, and the teen-age boys were no longer interested in taking care of a dog. Mom said Bel had separation anxiety so bad that she chewed herself out of her crate at the expense of her teeth!!!!!! This did not happen overnight......we can all fill in the blanks.

THEIR LOSS IS OUR GAIN

Once again Carolyn came to the rescue. She picked up Bel and took her to THE farm. We are so fortunate that Carolyn assessed Bel and thought she would do better with a sister/brother. Lucy, another of Carolyn's rescues, has been with us for 27 months. She was born May 26,2010.  We took Lucy to meet Bel on June 14th and Lucy immediately showed affection and whispered to us, please take Bel home!!  Lucy came to us when we had MacKenzie and she had to be the little sister. Since Mac died, Lucy has been top dog and in very much need of a little (older) sister. WOW, these girls are best buds after only three weeks. Bel has fit in so well we feel that we have had her for a long time. Although, maybe she would have liked to have gone to a dairy farm, since she has a healthy appetite for cheese!! 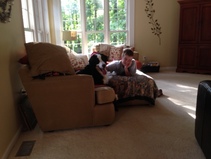 Reggie is a 1-½ year old male, who was given up because of his owner’s serious health diagnosis. He has been adopted in the Triangle area and is attending CGC classes. 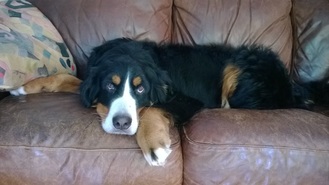 Marlowe is a 3-½ year old female. Sunday, November 1st, Terri and I went to pick up Marlowe from a family in Charlotte. She has been in two homes, and bit people and dogs in this last family for the past 6 months. She is fearful and misunderstood. She is a tall girl, taller than my boys. And yes, since biters aren't exactly adoptable, she will be staying here.

Axelson – 10-month-old male puppy from a young couple in South Carolina was adopted by a couple in Knoxville. This puppy is very fearful and from a breeder known for lack of socialization and fearful dogs.